The Living Room > summer in my head 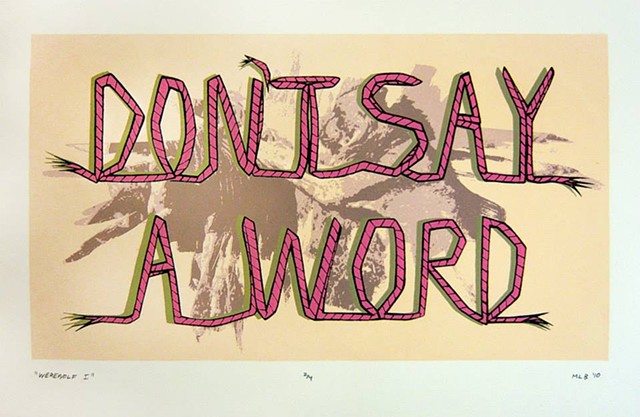 Werewolf I 2010 screen print Process All prints except one are editioned images. "Breathing and Panicking" is the most complicated screen based image I've ever attempted. I utilized the same process as any of my previous screen prints, but it was intentionally made as a mono-screen print. That is, there is only one that exists and no multiples were attempted during the process. It might be easier to consider it a painting that utilizes screen printing techniques. It probably has around 40 color runs. It took about three weeks to complete (from planning stages to finished product). Since it was a mono print, there was little to no room for error... Each of my prints are comprised of multiple stencil techniques (photo emulsion, screen filler, tape stencils to create gradient effects). I usually began with some basic pencil sketch of a figurative composition (a cartoon almost, just a black and white drawing usually inked with a micron pen) that was then collaged with found images or drawn textures to create some semi-complete template. It was then assembled to scale in Photoshop, certain key images were printed to transparency for exposure, others as registration guides. The prints were then pulled in the garage of whichever house I was living in at the time. Usually each color was pulled from background to foreground so if opaquely colored shapes overlapped others I would usually have to lay one or two runs of white beforehand (to reduce transparency of said layer). Usually the key layers would be towards the end (any black contour layers). "The Spirit of the Agreement" was made before I started using a screen printing extender medium, so i would have to wash my screen with a sponge after maybe only 3 or 4 pulls of a single color (to prevent the acrylic paint from drying in the screen). By the time I got to "Step Two" I had begun using said medium, process time was greatly reduced, giving me more freedom to experiment with detail and complexity (as well translucence).